Hey Guys! I’m back with another blog post in my Freedom of the Seas Reviews Series. Last post, we talked about the ship and included a little bit about the dining. This time we are going to take a deeper look at the MDR dining on Freedom of the Seas, including images of all of the menus.

About Dinner on Freedom of the Seas:

Onboard Freedom of the Seas, there are “three” main dining rooms. I put the word three in quotes for a reason. While there are 3 separate entrances on three separate decks, these three dining rooms are connected in the middle by a grand staircase. So while yes, you will have one of three names on your room key as your dining room, they are all pretty much the same. During my sailing on Freedom of the Seas, I was in Galileo’s Dining Room on Deck 5. There is also Leonardo’s on Deck 3 and Isaac’s on Deck 4. All three dining rooms offer the same menu nightly for guests. If you choose the traditional dining, you will either dine at 6:00pm or 8:30pm. If you choose My Time Dining, you can eat anytime between 6:00pm and 9:00pm. Keep in mind that when you select My Time Dining, you will not have a set table or wait staff every night. It works more like a regular restaurant where you just go up and tell them how many people and they seat you based on availability. The alternative option for the MDR for dinner would be Windjammer Cafe which is the buffet on board Freedom of the Seas.

During my voyage, I took photos of the menu each night as well as the items I ordered during my cruise. Keep in mind, I like stuff that is very plain, so sometimes the items came with other things but I did substitute, which is big on cruises. Below is a review of the food as well as the menus for each night.

Every day, the Cruise Compass would offer dress code suggestions for that night. The first nights suggestion was casual. Keep in mind that on the first night of the cruise, the dress normally is casual. Guests will show up in shorts and t-shirts or whatever they traveled in for the day. The menu choices were okay. I personally went with the basics as I didn’t love any of the appetizers offered. The French Onion Soup was good as was the Prime Rib and the Hazelnut cake. These were all solid choices for the first night of the cruise.

The MDR menu for the first night of our cruise consisted of the below: 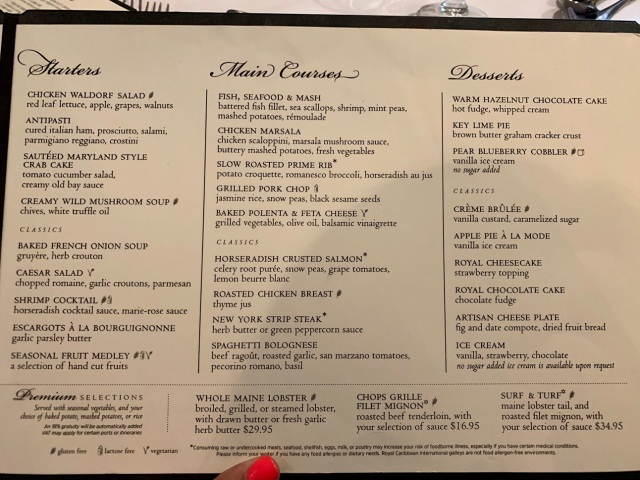 On our second night, our Cruise Compass suggested Formal wear. This was our first Formal Night on board. As cruises usually do, our first formal night had a bit more seafood than we normally saw on the menu. The Calamari and Lobster Bisque Soup were delicious. The roasted beef tenderloin was good as well but the portion was small. The Grand Marnier Souffle for dessert was really good.

The MDR menu for the second night of our cruise consisted of the below:

On the second night, I ordered the Crispy Calamari, Lobster Bisque Soup, Roasted Beef Tenderloin and the Grand Marnier Souffle.

On our third night, our Cruise Compass suggested Red Attire/Casual Attire. The reason for the red attire is that this night was when the RED night club experience took place. If you want to learn more about RED, check out the review of Freedom which gives more detail about it. Tonights French Onion Soup contained more onions than the first time, while the dinner was a winner! The short rib was delicious and HUGE! The Dark Chocolate Cookie Dessert was more like a cake than a cookie but it tasted good!

The MDR menu for the third night of our cruise consisted of the below: 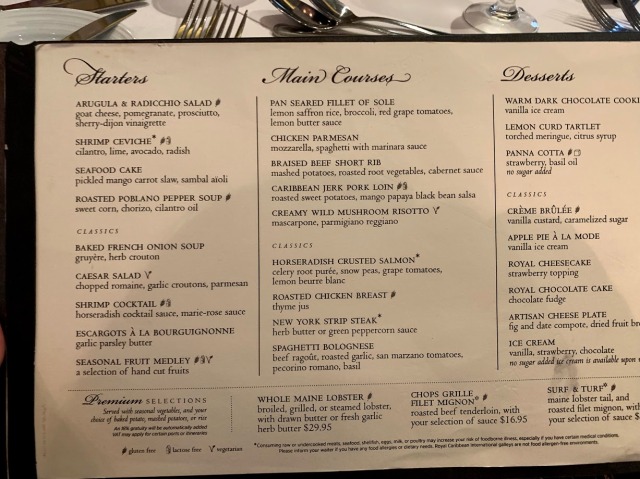 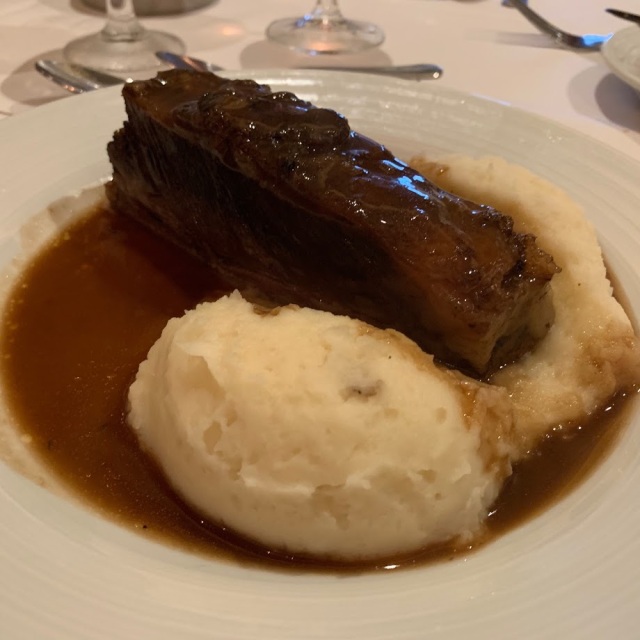 On our fourth night, our Cruise Compass suggested Caribbean/Tropical Attire. It was Caribbean Night onboard! This was fun and luckily I had a Caribbean themed dress with me because we didn’t know this was happening. That night there was also a dance by the MDR staff and then a really fun dance that included the guests on the stairs of the restaurant. Just saying our waiter Pavlo, got us involved in the dancing and we had a blast. We weren’t happy with the menu tonight, so we did a little bit of playing around to get something we liked. I wasn’t sure what Seafood Vol-Au-Vent was but it tasted really good once I ordered it. It was explained as a puff pastry with shrimp, mussels and scallops in a lobster bisque sauce. The Shrimp Cocktail was basic shrimp cocktail and tasted good. My dinner consisted of two orders of Chicken Tenders with French Fries. They tasted good and the chicken tenders were crispy. Royal Cheesecake was the pick for dessert and it tasted pretty good.

The MDR menu for the fourth night of our cruise consisted of the below: 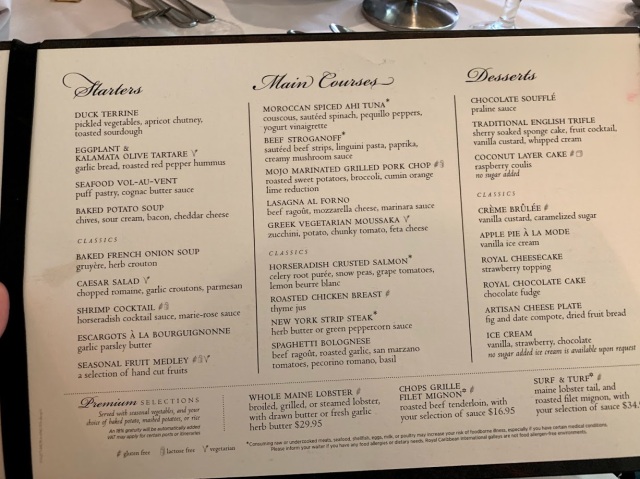 On the fourth night, I ordered the Seafood Vol-Au-Vent, Shrimp Cocktail, Chicken Tenders and French Fries and Royal Cheesecake.

On our fifth night, our Cruise Compass suggested Casual Attire. There were a few really good options on tonight’s menu. While I didn’t love the appetizer choices, I asked for the Garlic Tiger Shrimp as my appetizer. It was delicious. It’s really tiny for a dinner portion so keep that in mind if you want it and are considering getting it for dinner. The Roasted Rack of Lamb was delicious. Also, once again, was a small portion and I asked for another order and split it with my dad. Most of the people in my party (other than my dad & I) ordered the Chicken Cordon Blue and said it was delicious and a good choice. The unanimous winner for dessert was the Warm Donuts, which were served with whipped cream and chocolate sauce. They tasted really good.

The MDR menu for the fifth night of our cruise consisted of the below:

On the fifth night, I ordered the Garlic Tiger Shrimp, Roasted Rack of Lamb and the Warm Donuts.

On our sixth night, our Cruise Compass once again suggested Formal Attire. Usually cruises of seven days have two formal nights, with the second of the two being the more optional one. The menu for tonight had some of the best options of the cruise. Once again, wasn’t sure what the Vidalia Onion Tart was, but I ordered it and it was delicious. How could you go wrong with bacon? Now the real winners come. I ordered the Roasted Beef Tenderloin and Broiled Lobster Tail. This dinner was delicious! The sides were good as was the food. For dessert, the Molten Chocolate Cake was the winner. Once again, delicious! They also celebrated Royal Caribbean’s 50th birthday with a special funfetti cake. It wasn’t the best cake, but it was good and super instagrammable.

The MDR menu for the sixth night of our cruise consisted of the below:

On the sixth night, I ordered the Vidalia Onion Tart, Broiled Lobster Tail, Roasted Beef Tenderloin and Molten Chocolate Cake. We also were given the Royal Caribbean Birthday Cake.

On our final night, the Cruise Compass suggested Casual Attire. Tonight’s menu was also one of my favorites, tied with the night before. The Coconut Shrimp were delicious. I am sure glad I ordered 2 of them. The choice for tonight was the Braised Lamb Shank. I paired this with the Cheese Tortelloni (which I ordered with no sauce). Both were delicious! It was a great choice to end the cruise. For dessert on our final night, I ordered the classic Royal Cheesecake yet again.

The MDR menu for the seventh night of our cruise consisted of the below: 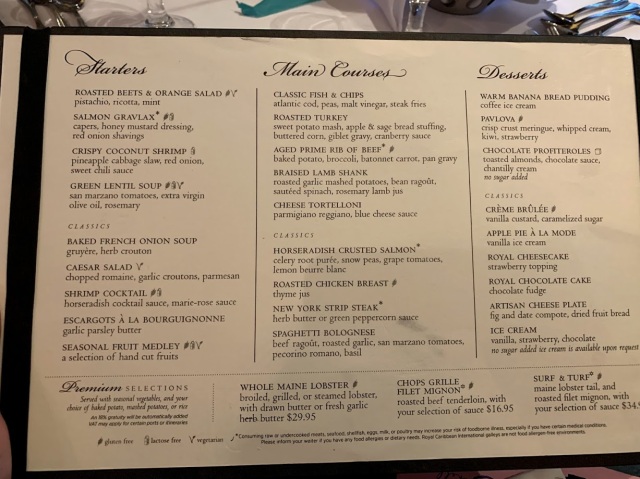 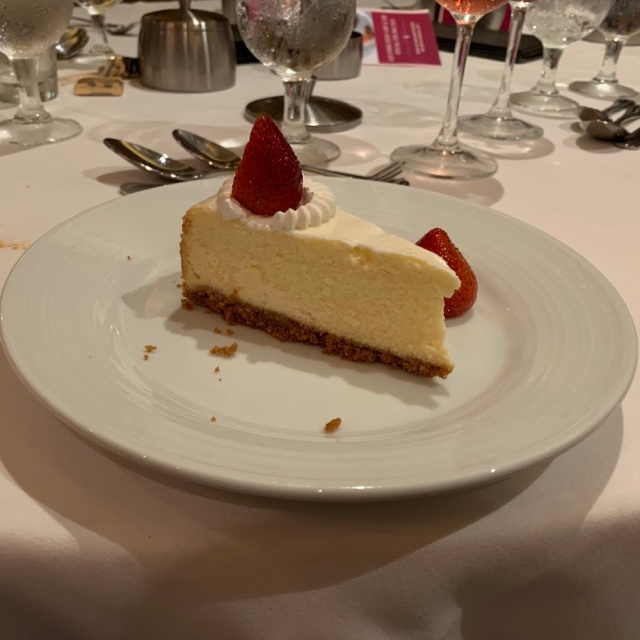