This type of review is a little new for me since I usually only post about Disney! But I took a poll on my Instagram and you said you wanted to see a cruise review! Let me know your thoughts or if you want to go on the NCL Escape.

I recently sailed on the NCL Escape for a 7-night cruise to Bermuda. During this voyage, the Escape docked in Kings Wharf, Bermuda for three days. This review will be long as I’d like to hit all of the major points about the ship, cruise line and crew.

We arrived at Pier 90 on the West Side of Manhattan at around 10am. Since we were gold latitudes members, we proceeded to the Latitudes Check-In area. Everything went smooth and we were checked in within 10 minutes. Unlike some other cruise lines, NCL does not have you put your credit card information in during online check-in, so this must be done upon arrival. Our boarding group was #7 and we boarded the ship at around 11:15am, 5 minutes after the announcement was made that boarding has begun. 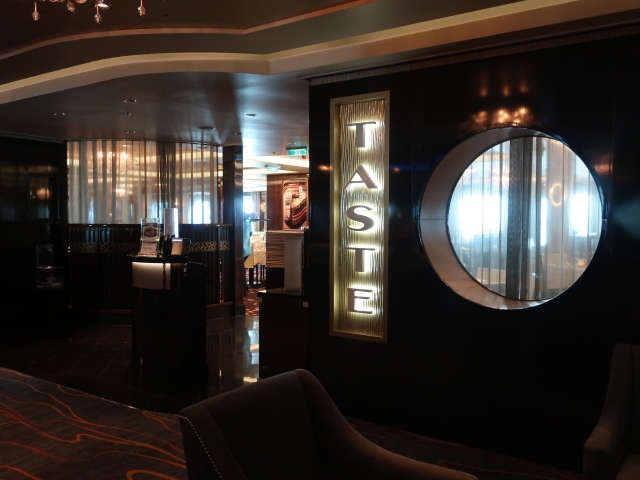 When we booked our cruise, we received the Ultimate Dining Package as one of our perks. This allows you to dine at one of the specialty restaurants on the ship. During the week, we visited Cagney’s Steakhouse, Moderno, Teppanyaki and Taste. I love the concept of Freestyle Dining that allows you to experience different places every night for dinner. All of these restaurants offered delicious food! I highly recommend Moderno Churrascaria, which is a Brazilian Steakhouse that entertains the largest of appetites. This is where the waiters walk around with different meats and you use a double sided card to let them know if they should come over or not. Don’t discount Cagney’s or Teppanyaki either. They offer really delicious food! Also, if you aren’t interested in those specialty restaurants, there is Taste, one of three main dining rooms onboard. For breakfast, I ate at the Garden Cafe, which is the buffet onboard. They had a myriad of choices for every kind of breakfast lover. 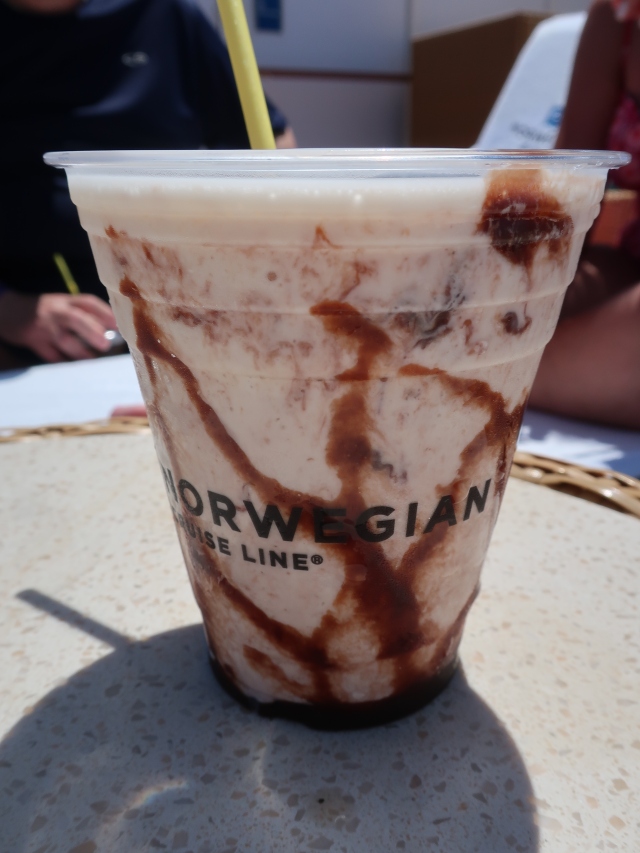 As I mentioned, in addition to receiving the Ultimate Dining Package, we also had the Ultimate Beverage Package. Since I received it as a part of a perk, it was great. You are able to get alcoholic beverages and soda up to $15. In my opinion, it’s great if your getting it as your perk. If you had to purchase the package, I don’t know if it’s worth it. The package was around $700 for 7 days and did not include bottled water or specialty coffee, unlike beverage packages on some other lines. (TIP: NCL does not have straws for their drinks anymore. Bring a box of straws with you! We didn’t know that and ended up getting a pack when we got to Bermuda) I also purchased the internet package while onboard. Having experienced internet packages on other cruise lines, this one was pretty slow and very expensive.

For the Record: The Brat Pack

The entertainment onboard the Escape was great, especially the For the Record: The Brat Pack Show. I thought it was amazing! The singers were great and the premise of the show was amazing! Think about all of your favorite classic 80’s movies together in one show, and that’s For the Record. It was awesome. The other show, After Midnight was good. I think the music was a bit older so it was harder to connect with it. This show also featured tap dancers, who were amazing! NCL is famous for their deck parties. I saw in the Freestyle Daily that they had an 80’s party, a Norwegian’s Night Out party and a Glow Party. I attended the Glow Party which was at Spice H2O and was lots of fun!

I visited the Mandara Spa for a 75 minute Swedish Massage. The spa was great and the massage was very relaxing. I loved that they had a relaxation room so that there was somewhere separate to wait for your massage. I’ve been on cruises where you have to wait in the hallway for them to call you. My only issue was that they definitely wanted to sell you products when the massage was over, which I didn’t love. 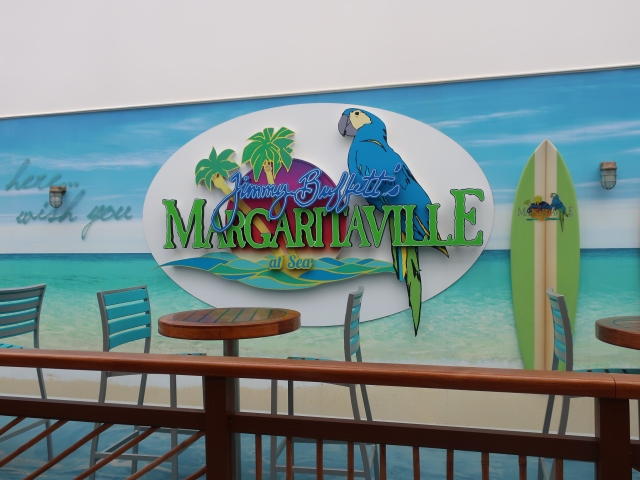 We loved that the ship had a Margaritaville. We stayed there during sail away and met the BEST bartender Carlito. If you are sailing on the Escape, you have to go visit him! He makes the best drinks and he is super nice! By day he is at Margaritaville and at night he is at the Skyline Bar, which is near the casino. To us, this was like the club, since there wasn’t really a dedicated “club” per-say. We loved hanging out here at night and listening to the live music. 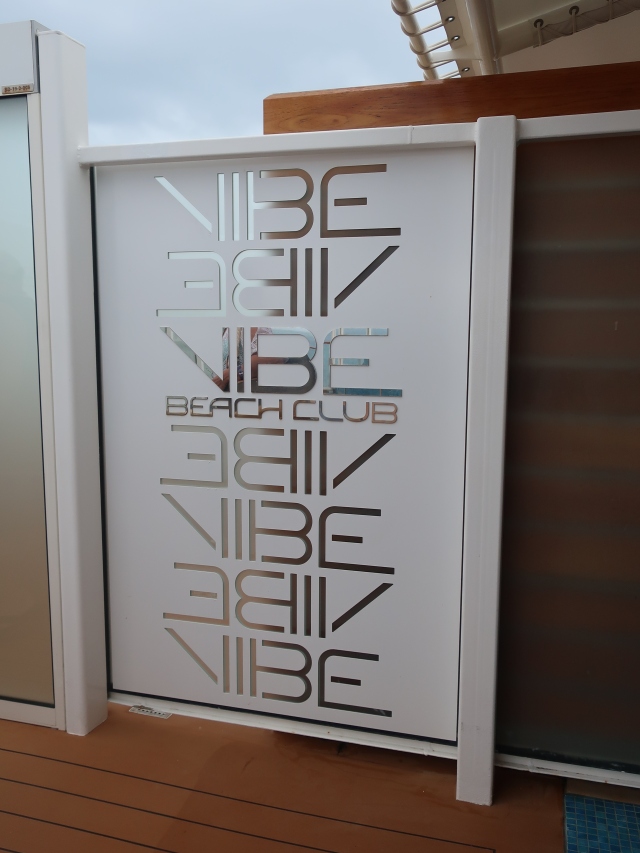 We were lucky enough to get passes to Vibe Beach Club, which is an adults only sundeck on certain NCL ships. They sell about 70 passes during a voyage and there is no need to worry about deck chairs or proximity to the bar. All the lounge chairs here are padded, there is a “bubble-less” hot tub and much much more. Waiters make sure you always have water and a drink in hand. Plus during the day, they will bring around, fruit, cookies or wraps. We had a wonderful bar waiter, Roberto. He was always around making sure we were well taken care of. At night, Roberto was also around at Skyline and the casino.

I highly recommend you get to the embarkation port early so that you can try to get passes to Vibe. Since there is such a limited number, the earlier you get on the ship, the better.

View of Hamilton from Ferry

As I mentioned, the NCL Escape docked in Bermuda for three days, two nights, allowing plenty of time for us to explore. I’ve been to Bermuda many times, but I always love going back. The island is clean and the people are always nice. During our first day, we took the ferry to Hamilton and visited Front Street. The ferry is easy to pick up at the Royal Naval Dockyard right outside the ship.

On the second day, we went to Tobacco Bay, which is in St. George’s. Keep in mind this is about an hours taxi ride away and quite pricey. There is also a ferry you can take through the cruise line, but the times are very limited. The beach was a bit crowded but the water was very still. We did not disembark the ship on our last day in Bermuda.

Thursday and Friday of our visit were national holidays in Bermuda (Emancipation Day and Somer’s Day, during which the annual cup match is played- celebrated the Thursday & Friday before the first Monday in August). We were initially told that all stores would be closed those days, but later found out that the stores at the Naval Dockyard stay open.

My cabin this year was a mini-suite located on deck 10. The room is a bit smaller than the mini-suites on older NCL ships, but was good for a family of 3. One other note I will make about the room was in regards to the bed/sofabed. If I could offer NCL some advice, it would be to invest in some mattress toppers, because the beds were hard. Other than that, the room had all the amenities we needed to make the week great. This category room offers a balcony which was nice to go out on during sail away or when leaving a port.

The crew onboard was awesome! I can’t say enough nice things about them. The cruise director Alvin was always around. I’ve been on cruises where I’ve never seen the cruise director and that wasn’t the case here. As I mentioned, Carlito at Margaritaville/Skyliner and Roberto at Vibe/Skyliner were awesome! They were like we were visiting old friends and took care of everything we needed. The port shopping consultant, Dan and Dan, were really nice and if they saw you on the ship, they would stop and say hello! 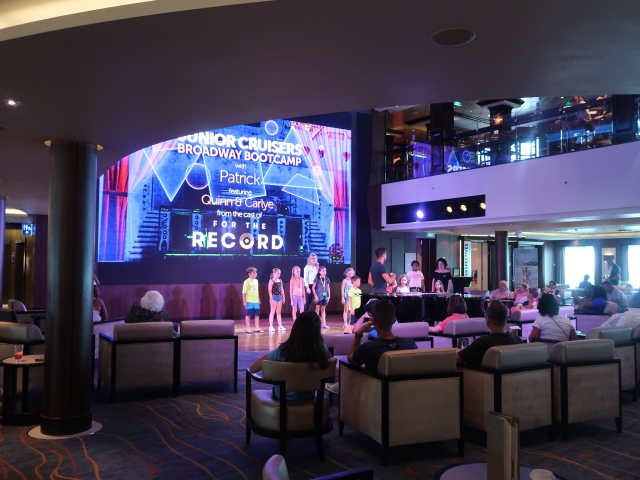 Even though there are a few things I thought could use improvement, I had an amazing time on the NCL Escape! The food is really good, the entertainment is good and there is lots to do!