Follow The Happiest Travels on Earth on WordPress.com
https://pagead2.googlesyndication.com/pagead/js/adsbygoogle.js?client=ca-pub-9481123021054607

Your Guide to Mickey’s Not So Scary Halloween Party

The end of August is an exciting time at the Happiest Place on Earth. Besides the Food and Wine Festival starting up soon, Halloween is also on the horizon. And you know what that means, Mickey’s Not So Scary Halloween Party has begun! This special ticketed event at the Magic Kingdom happens on select nights now through Halloween. Ask a lot of people and they will tell you it’s probably one of their favorite parties at Disney. Here are my tips and tricks for attending Mickey’s Not So Scary Halloween Party.

Don’t Purchase a Park Ticket for that Day

Since Mickey’s Not So Scary Halloween Party is a special ticketed event at the Magic Kingdom, your Magic Your Way Tickets won’t work for admittance into the park. My tip is to not buy a regular park ticket for that day. Guests with tickets for the Halloween party can enter the park at 4pm with a wristband, so I highly recommend you do this. Between 4pm-7pm, you can utilize the same benefits you would with your regular park ticket, such as using Fastpasses. After 7pm, all guests without Halloween party tickets must leave and the party begins. This is when use of Fastpasses are suspended.

Pick Up Your “Party Favors” 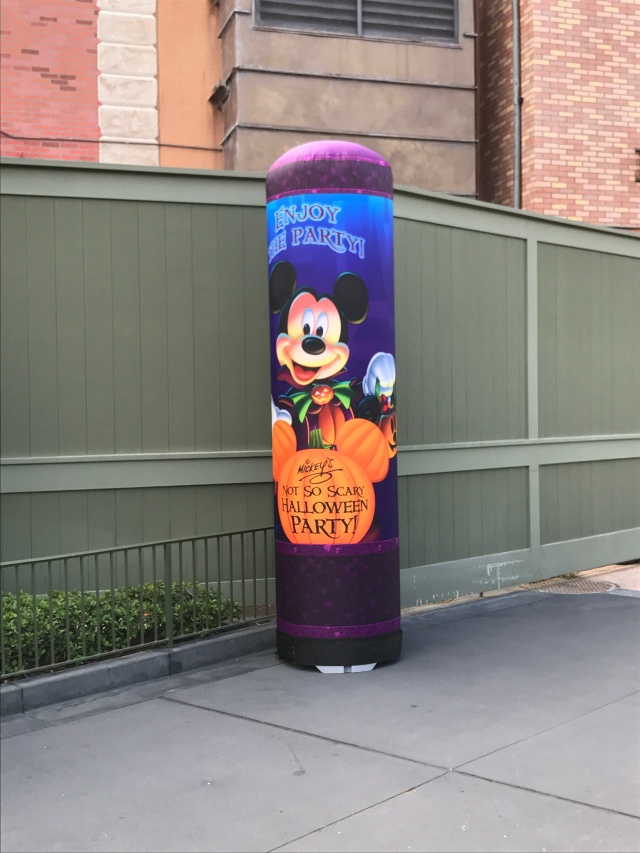 Exit to Park from Party Center

Upon entering the park from 4pm on, guests with party wristbands are directed to the walkway next to the Town Square Theater. There are special decorations to get you in the festive spirit. You will receive your trick or treat bag here and some candy to fill it up! There are also special party photopass opportunities available that are worth the stop and an opportunity to purchase party specific merchandise. Also, be sure to grab a party map to see where character meet and greets are located and trick or treat locations.

Have Dinner before 7pm

Make Time for the Special Shows during the Party

In honor of Halloween, there are some special shows during the Party. Be sure to make time for the Boo To You Halloween Parade, Hallowishes Fireworks Show and the Hocus Pocus Villain Spectacular. All of them combine Disney and Halloween for some spooky fun!

Boo To You Halloween Parade

Pirates of the Caribbean Float 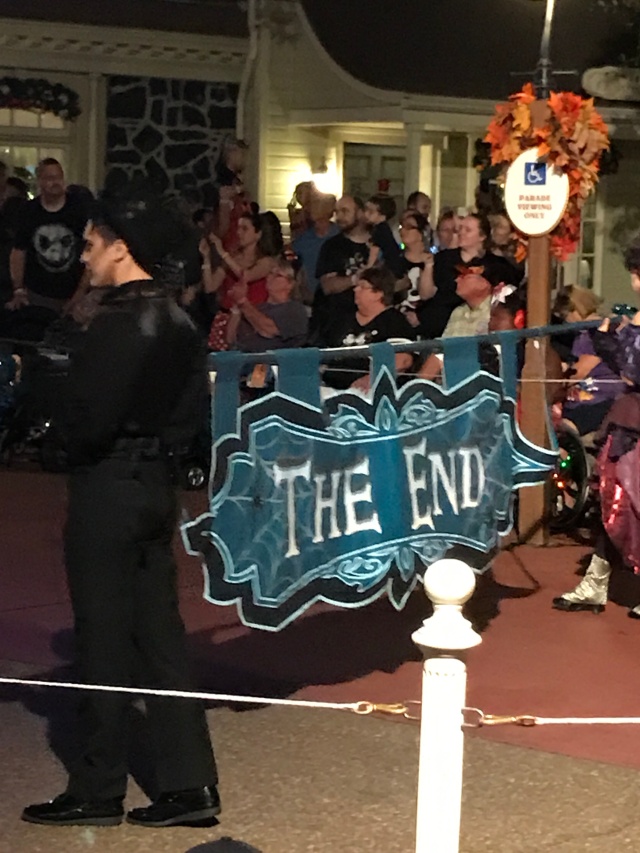 The End of the Parade

This parade runs 2x a night during the Halloween Party. It’s so cute to see all of the characters in their Halloween best. It starts in Frontierland and makes its way through Liberty Square all the way down Main Street U.S.A. My tip, grab a spot by the Hall of Presidents in Liberty Square. It’s a great viewing spot since you are getting to see the parade early on and once the parade is over, you aren’t stuck on Main Street.

A stage show located in front of Cinderella Castle, the Hocus Pocus Villain Spectacular features the Sanderson Sisters as they enter the mortal world for one night. There are 3 showtime performances during the party. While I didn’t stay to watch the whole thing, it looked like a really good show from what I did see. Plus, if your a big fan of Hocus Pocus, you will probably love it!

Hallowishes is the fireworks spectacular that happens once a night during the party. The premise is that the villains light up the night sky and the castle. Last year, I watched Hallowishes from the side of Cinderella Castle, near the entrance to Tomorrowland. It was a nice spot that wasn’t as crowded as the front of the Castle plus you could still see the special effects.

Meet at Least 1 Character During the Party

Character Meet and Greet with Goofy

Mickey’s Not So Scary Halloween Party is filled with party exclusive characters, all dressed in their Halloween best. Some of these characters are super hard to visit during the party because of the lines. These include Jack and Sally and all of the 7 Dwarves. If you don’t mind spending time at the party waiting on line for characters, totally go for it! During the party I went to last year, I found that the line for Goofy in Storybook Circus wasn’t long at all, so I stopped by there and visited him. He was an AWESOME character to see and very fun! Mickey, Donald, Daisy and Minnie were also at Storybook Circus. Their lines were so long!

Be a Little Festive or A Lot Festive

@sammiemaybe and @aly_sf wearing their costumes at the Halloween Party

The Halloween Party is the only time of year that adults can dress up in Halloween costumes. Whether you just sport a festive t-shirt and ears (like I did) or go full blown costume, anything goes at this fun event!

Trick or Treat Bag with Candy

Wait to Visit Certain Attractions Until the Party Starts 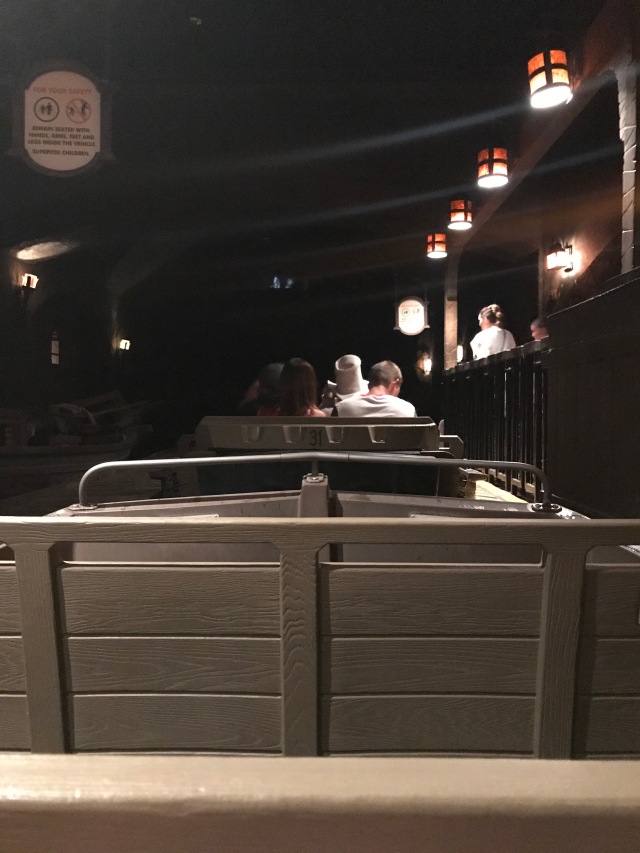 Once the party starts, only certain attractions are open, but if the open ones are on your list, definitely check them out. The lines are shorter since there aren’t as many people in the park, and a lot of people are doing other things during the party. There were no waits on rides when I attended. Plus, some of the attractions are even cooler during the party, like Pirates of the Caribbean and the Haunted Mansion. In the queue for the Haunted Mansion, there is Lady Carlotta who makes an appearance. It is a lot of fun. I also hear this year, there is a live action element to the Pirates of the Caribbean ride that is a lot of fun!

While there is a lot going on at the party, it is a good to have a plan of action and know what you want to do. Here is a brief timeline of my plan during the party I attended last year. I hope this helps you out!

4:15pm-4:30pm: Head to the area left of Town Square Theater to Pick Up Your Party Bag and take PhotoPass Photos

4:30pm-6:00pm: Use any Fastpasses you scheduled for the day and ride some of the rides that will be closed during the party

7:30pm-8:30pm: Ride some open party rides and do some trick or treating along the way i.e. Pirates & the Haunted Mansion

10:30pm-END: Catch a few minutes of Hocus Pocus, Take some more Photopass Photos, Do some Party Shopping and Enjoy…………

On Your Way Out, Don’t Forget to Look Around 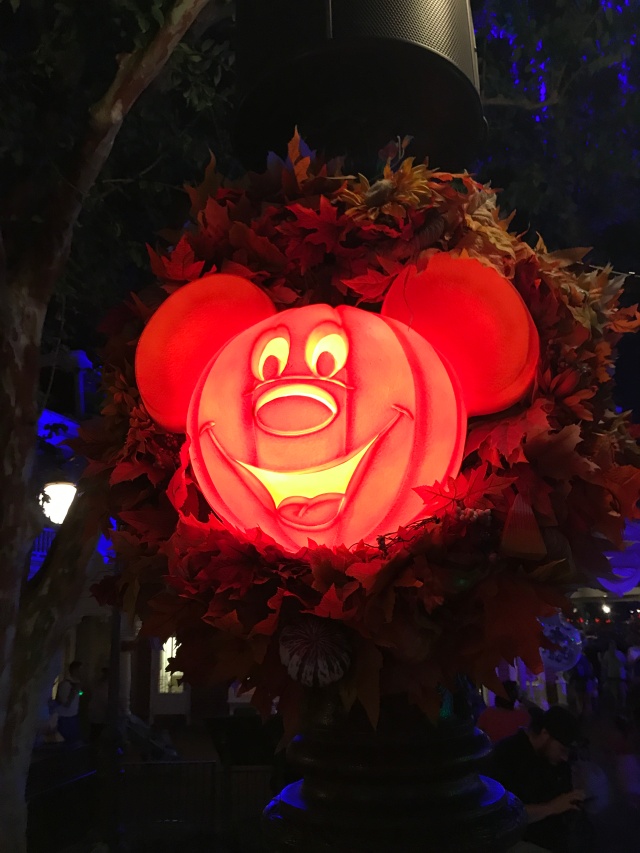 These are just some of my tips and tricks that I learned by attending the Halloween Party last year and doing some research. I hope these help!

Have you ever attended Mickey’s Not So Scary Halloween Party? If you have, what is your favorite part? If not, what would you want to do first? Let me know in the comments below!